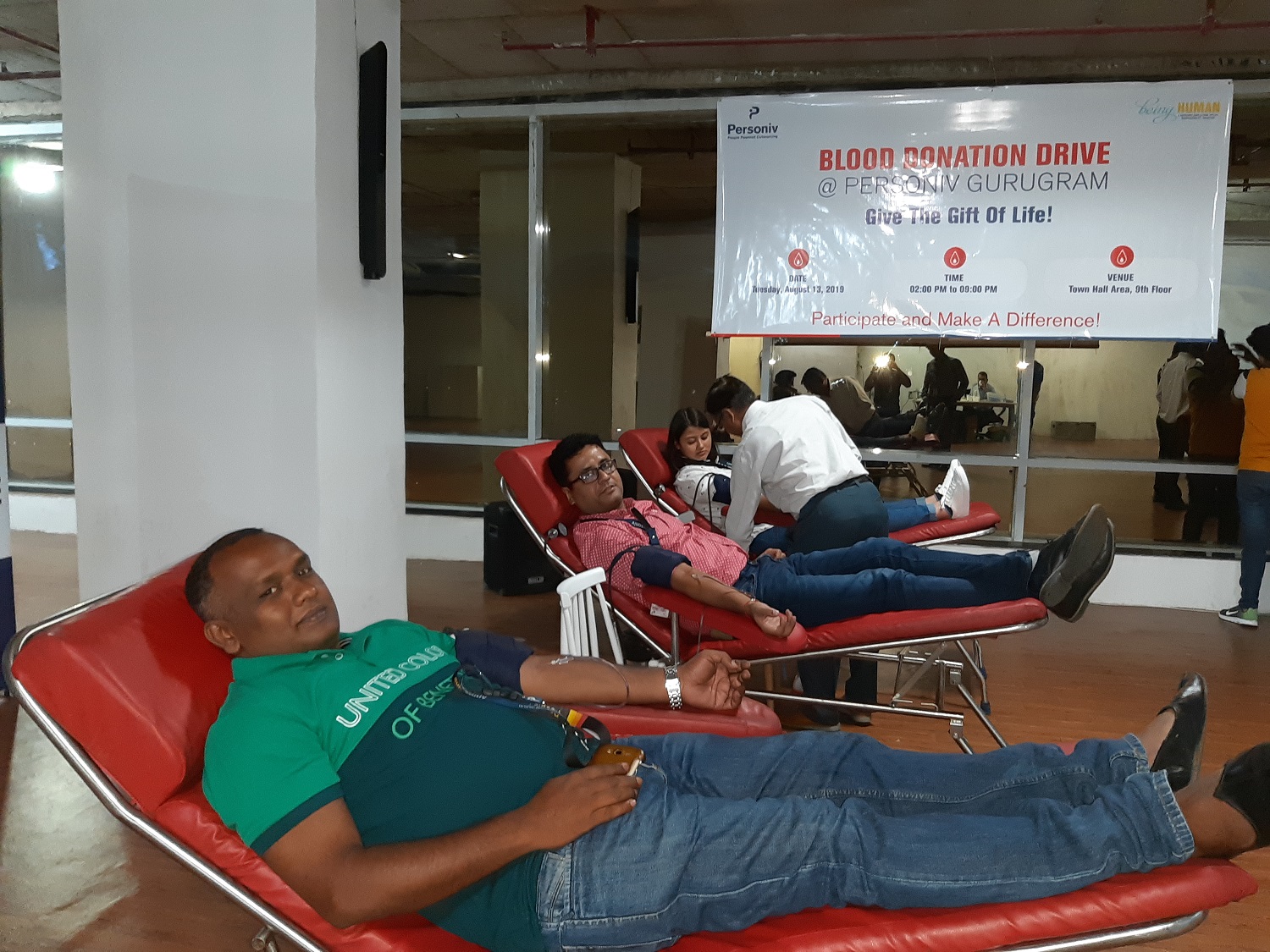 As part of Personiv’s value of #GivingBack, Personiv Gurugram contributed a generous amount to Assam Flood Relief Fund and organized a blood donation camp in the month of August 2019.

The recent flood in India’s northeastern region had created havoc in people’s and animals’ lives, destroying their homes, crops, schools, and for many, washed away everything they owned. Gurugram team voluntarily contributed INR 1,54,680 which was deposited to Assam’s Chief Minister Relief Fund to help provide food and medical facilities and temporary shelters for the flood-battered people of the state. 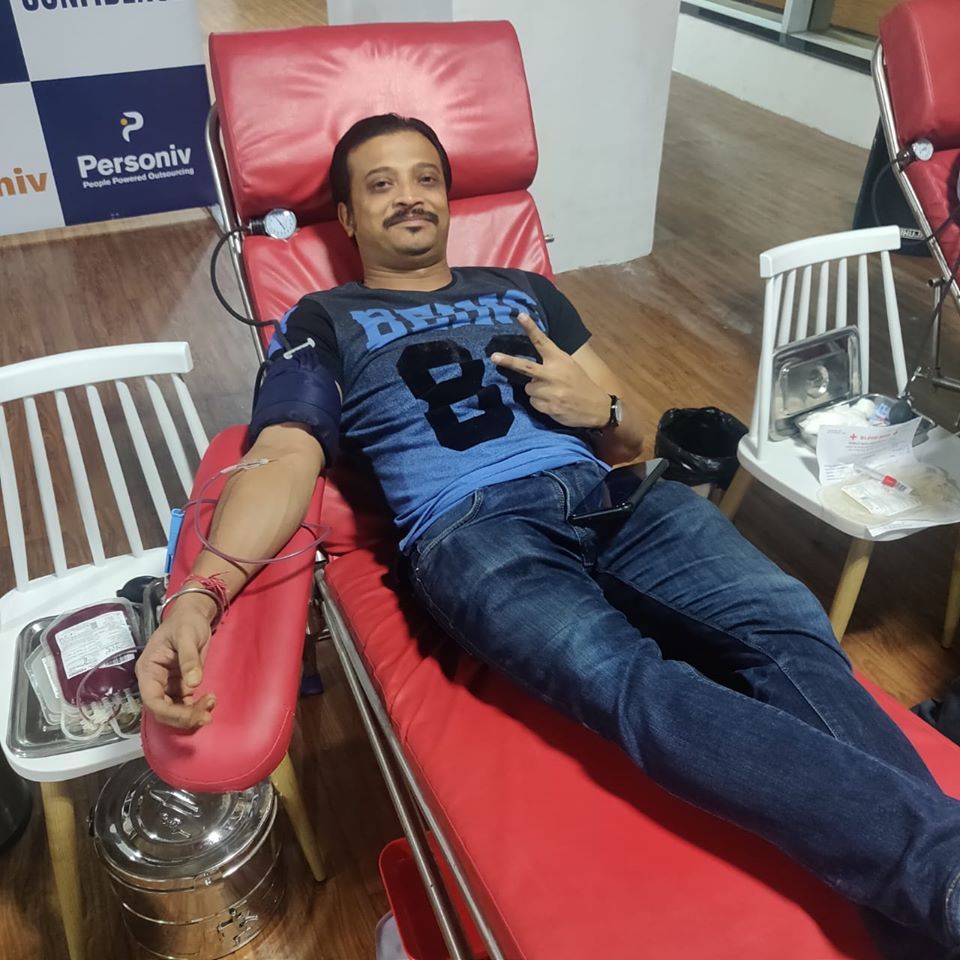 Gurugram team also organized a blood donation drive at its premises in partnership with BloodConnect, a youth-led initiative. The morning camp, that saw 35 units of blood collection, was held on August 13, 2019 at the Town Hall Area, 9th Floor, and was managed by a team of doctors and trained nursing staff.

Such initiatives truly demonstrate Personiv’s unwavering commitment towards #GivingBack to the society and meaningfully enriching the lives of its community members. 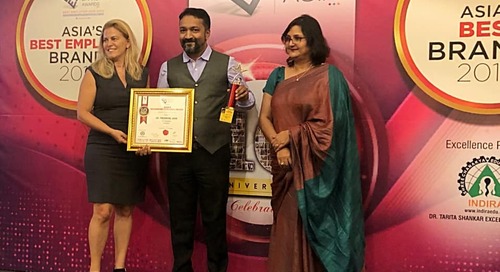 Congratulations to our CEO, David Lesniak, and Personiv Coimbatore’s EVP & Site Head, Fred John, for their ... 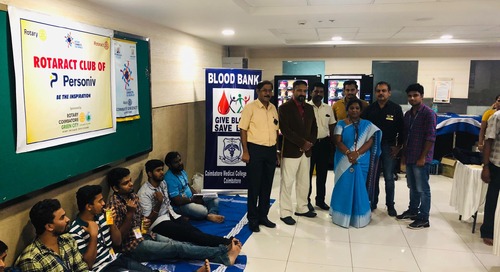 Personiv Coimbatore demonstrated the spirit of #GivingBack by taking school students to a mall for the firs... 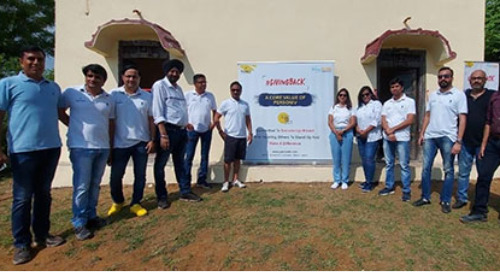 Recently, volunteers from Personiv’s Gurugram site came together to install solar panels, streetlights and water purification equipment as part of this quarter's Giving Back initiative. 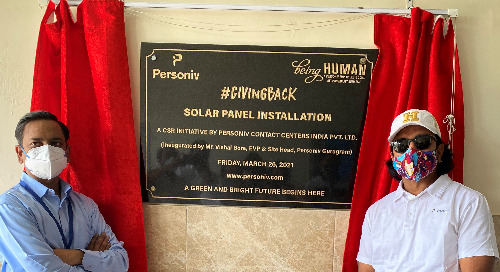 Personiv Gurugram Gives Back at the Leprosy Mission Hospital

Personiv Gurugram inaugurated the installation of a Solar Panel project at The Leprosy Mission Hospital in New Delhi. 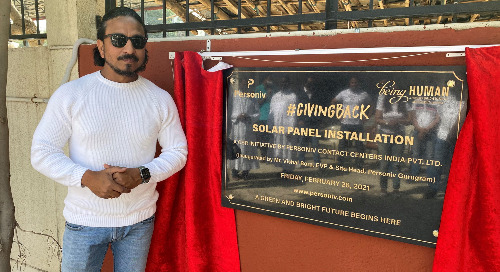 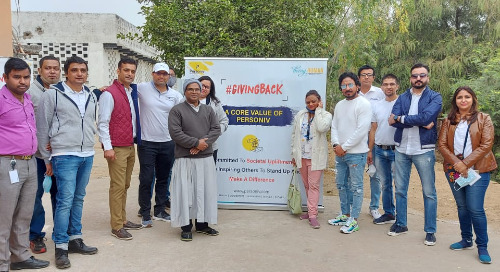 Personiv Gurugram inaugurated the installation of a submersible pump system at Anand Ashram – a homestead for orphan boys on December 12. 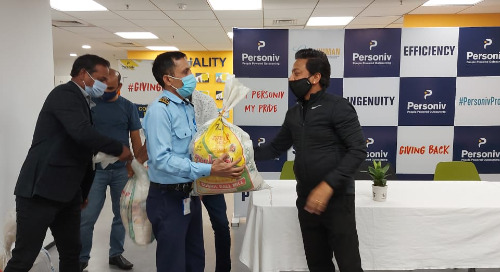 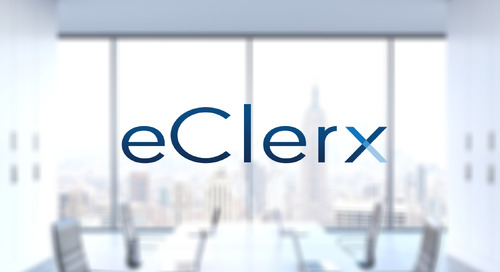 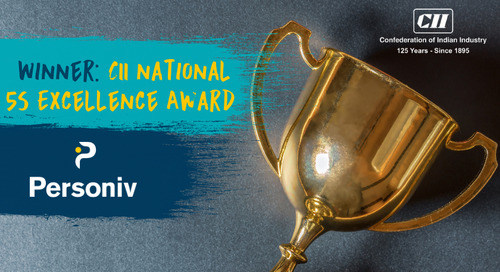 Personiv is proud to announce that it was recently recognized by The Confederation of Indian Industry (CII) for its implementation of the organization's "5S" methodology both at its Coimbatore site. 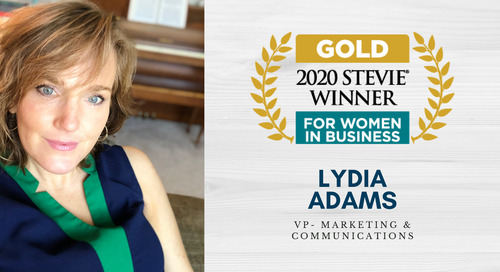 We are proud to announce that Lydia Adams, Vice President of Marketing and Communications for Personiv has been named the winner of a Gold Stevie® Women in Business Award for Mentor of the Year 2020. 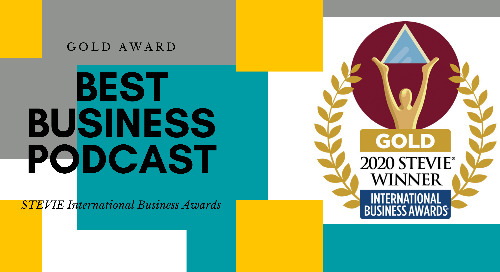 Personiv, an Austin-based and globally recognized outsourcing provider, was named the winner of a Gold Stevie® Award in the Publications category of the 17th Annual International Business Awards®. 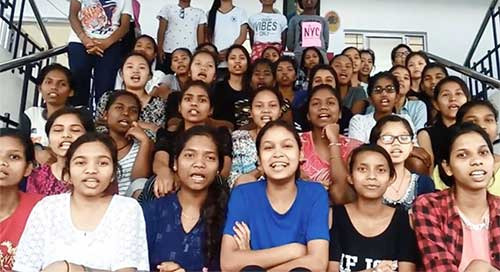 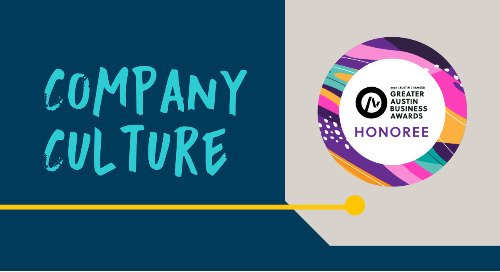 Personiv, an Austin-based global outsourcing provider, is pleased to announce their inclusion on The Austin Chamber of Commerce's list of honorees in their annual Greater Austin Business Awards 2020. 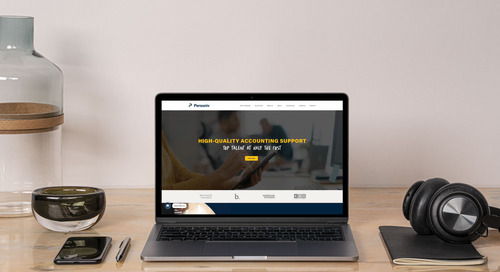 Personiv announces that they have rolled out their highly-anticipated and fully responsive new website, which includes links to independent finance & accounting outsourcing research, videos and more. 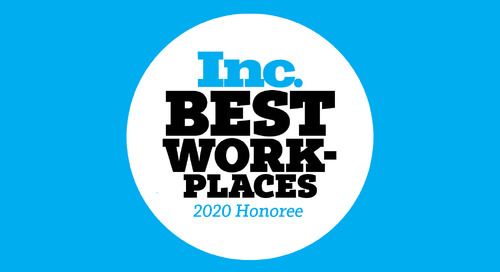 Global outsourcing leader, Personiv, has been named as one of Inc. magazine’s Best Workplaces of 2020 with 100 percent of surveyed employees saying they were “engaged by the work they do". 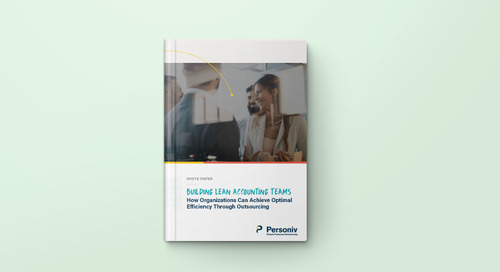 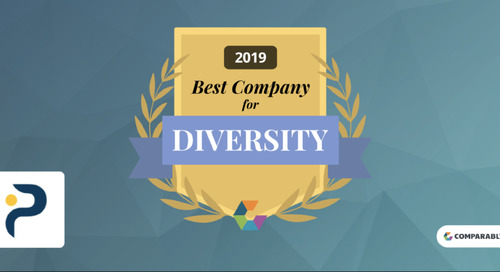 Personiv, a global leader in accounting, back office, digital and customer contact outsourcing has been named as one of Comparably's 2019 Best Companies for Diversity in the category of large companie 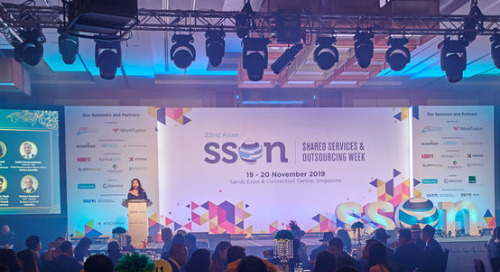 Personiv Manila Recognized for Its Unique Approach to Outsourcing Partnerships 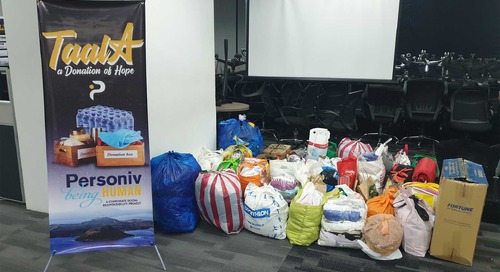 Our dedication to "Being Human" is endemic to our cultural pillars here at Personiv. We couldn't be prouder of the members of our team who work hard day in and day out in Manila -- not just for our cl 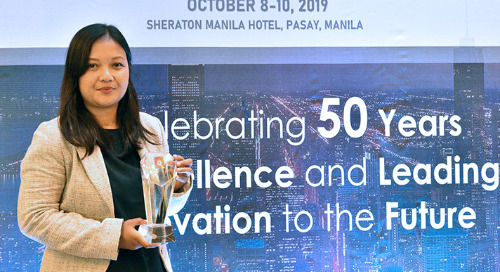 We are so pleased to announce that our Manila-based team has won the Philippine Society For Quality 2019 Excellence Team Award at the organization's 30th National Quality Forum. 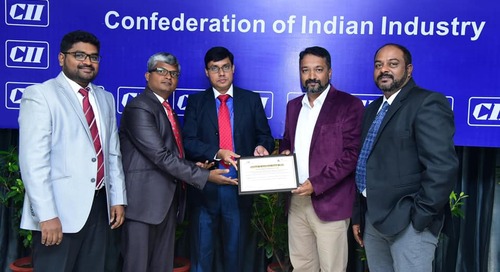 Personiv Coimbatore has won yet another award! the Excellence in 5S Implementation (with a GOLD rating) by the CII Center of Excellence, Chandigarh, at the National level. 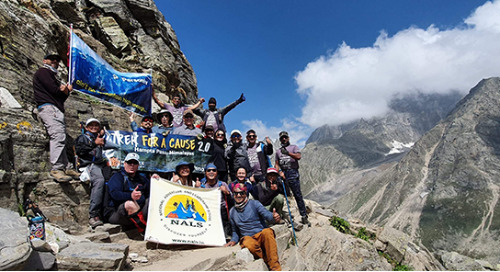 Personiv’s ‘Trek for a Cause 2.0’ Raises More Than $5K for Orphaned Children

In their second such effort, members from each of Personiv’s four global sites set out from the Kullu Valley in Himachal Pradesh, India, on September 11 to buttress their efforts to raise money...